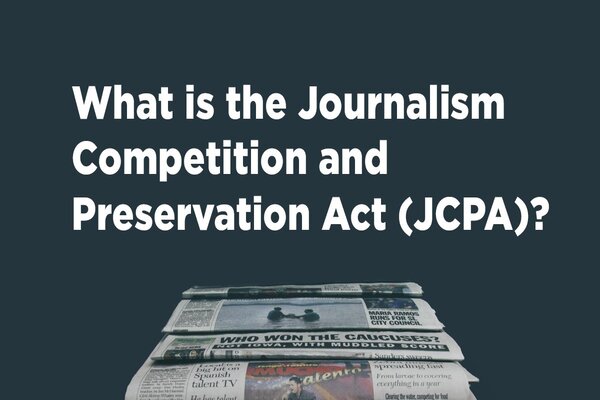 (breitbart) – A new version of the Journalism Competition and Preservation Act (JCPA) is circulating that is worse than the original. It allows mainstream, legacy and left-wing media to form exclusionary media cartels and then empowers them with extraordinary collective-bargaining power to collude with Big Tech companies. The amendments serve only to spell out in greater specificity how to exclude conservative and anti-establishment media from any alleged benefits.

Specifically, the new JCPA contains a provision that allows “eligible” media companies forming a cartel to “create admission criteria for membership unrelated to the size of an eligible digital journalism provider or the views expressed by its content, including criteria to limit membership to only eligible publishers or only eligible broadcasters.”

That provision is significant especially for its specificity. These mainstream and left-wing media cartels may not exclude based on size or “views expressed by its content.” But that is not how the exclusion happens or will happen.

These self-appointed mainstream and left-wing media cartels ARE allowed to exclude based on the usual, totally subjective, factors they always do, such as: “trustworthiness,” “fake news, “extremism,” “misinformation,” “hate speech,” “conspiracy,” “correction policy,” “expertise,” “authoritativeness,” etc.

All of these terms are viewpoint neutral, yet when interpreted by leftist NGOs, “media watchdogs” like NewsGuard, and the fact checkers and content moderators of Big Tech, inevitably end up targeting just one side of the political spectrum, with only the occasional token reprimand of the corporate mainstream media.

Despite misleading the American public for years – even winning a Pulitzer for their efforts – most of the news companies that pushed the discredited “Russiagate” conspiracy theory, like the New York Times and the Washington Post, continue to receive a “green” approval rating from NewsGuard, while news outlets that debunked the conspiracy theory, like Breitbart News and Fox News, are smeared as untrustworthy and unreliable.

It is easy to imagine a news cartel pointing to NewsGuard criteria – or the criteria of any organization presenting itself as an “independent watchdog” – as an allegedly viewpoint-neutral excuse to exclude conservative and independent media.

The bottom line is that any conservative or independent, or any free speech advocate, much less any Republican who does not see this fatal flaw is whistling past the graveyard and is not worthy of political support.

All they are doing by supporting this amended bill is rewarding mainstream, legacy, and left-wing publishers and Big Tech by allowing them to exclude whomever they deem not part of the club – and who do they think that will be?

Here is a hint: last week, the President of the United States just called half the country extremists who threaten the very foundation of our Republic.

The GOP leadership in the House of Representatives has condemned the bill, with GOP leader Rep. Kevin McCarthy (R-CA) calling it the “antithesis of conservatism,” and Judiciary Committee ranking member Rep. Jim Jordan (R-OH) warning it will be used to suppress competition.

“They [the media] will use it, in the end, to discriminate against people who don’t fit into their category, who aren’t defined as ‘the press’ — and who’s going to determine that definition?” said Jordan.

In the Senate, the bill has been condemned by a growing number of Republican senators, including Marsha Blackburn, Marco Rubio, Tom Cotton, and Mike Lee.

Republican FCC Commissioner Nathan Simington, and the legal scholar who worked on President Trump’s proposed Section 230 reforms have also warned of the dangers of the legislation.

It’s not just conservatives opposing the bill — the JCPA is so transparently aligned with the interests of corporations that even some progressive think tanks have spoken out against it.

These include Public Knowledge, which called it a gift to “Wall Street media executives,” and Fight for the Future, which argued it enables an internet-killing “link tax,” and Free Press, which called it a bailout for Rupert Murdoch.  The left-leaning Electronic Frontier Foundation also opposes the bill. All emphasized how the bill would benefit America’s largest, wealthiest, and most corrupt media companies.

Despite this widespread opposition, lobbyists have brought the JCPA back again, with amendments that should leave the public in no doubt that this is a bailout for the legacy media.