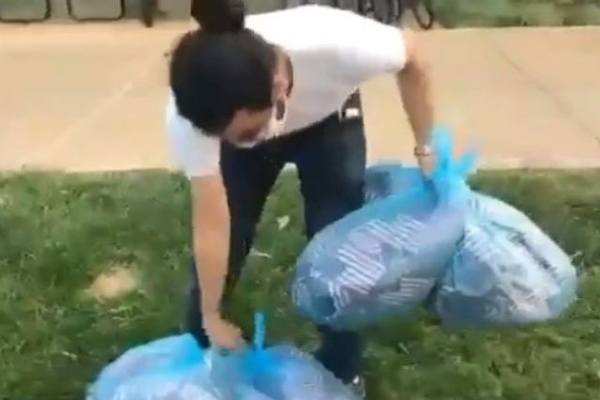 YAF says Alkilani removed 2,977 American flags that were placed on campus — one for each of the victims murdered 20 years ago by Islamic terrorists — as part of the conservative student organization’s “9/11: Never Forget Project” memorial.

Nathaniel Hope, a member of WU’s College Republicans student group, filmed Alkilani, who allegedly said he took the flags in “protest against American imperialism and the 900,000 lives lost as a result of post 9/11 war,” according to YAF.

On Saturday, Washington University administrators condemned the removal of the flags, but declined to say whether Alkilani would face disciplinary measures, according to Student Life.

The university’s Vice Chancellor for Marketing and Communications Julie Flory told Student Life, “We were disappointed to learn about the disruption to the 9/11 display on Mudd Field.”

“We condemn the interference with the expression of support by the College Republicans for the victims of the national tragedy that took place 20 years ago today,” Flory added.

Washington University responded to an inquiry from YAF, telling the student organization, “The actions surrounding this incident were not on behalf of the university or a university-sponsored organization.”

“We value freedom of expression in all forms and will work to ensure that all students are able to express their points of view through appropriate channels without disrupting the rights of others to show support for causes they care about,” the university added. “This is a critical component of our core values and we are committed to facilitating free speech on our campus.”

The stolen flags were eventually planted again for the viewing and remembrance of the campus community, YAF said.

Bizarre behavior and anti-American stances such as the alleged incident on WU’s campus are not uncommon among today’s college-aged students, who are now either too young to recall the events of 9/11, or had yet to be born on the day of the attacks.