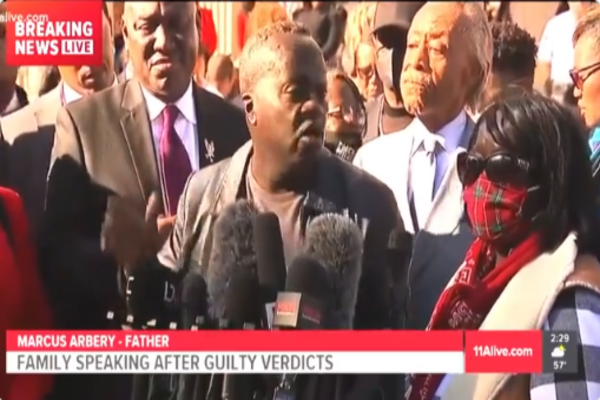 (breitbart) – The father of Ahmaud Arbery declared “all lives matter” shortly after a jury found Travis McMichael, Gregory McMichael, and William Bryan “guilty” of the murder of his son.

Speaking on the steps of the courthouse on Wednesday afternoon, Marcus Arbery said that his son’s murder should not happen to anyone, be they black or white.

“For real, all lives matter,” Arbery said as the crowd, including Rev. Al Sharpton, nodded in agreement. “Not just black children, we don’t want to see nobody go through this.” He went on to say:

I don’t want to see no daddy to watch his kid get shot down like that. It’s all our problem. So let’s keep fighting. Let’s keep doing it and making this a better place for all human beings. All human beings. Love everybody! All human beings need to be treated equally. Today is a good day.

As Joel Pollack noted earlier, the family of Ahmaud Arbery has steered clear of divisive politics throughout the aftermath of his murder, having previously met with former President Trump and even granting interviews with Breitbart News.

“Though the trial became racially and politically charged, it was not so initially; the Arbery family’s attorney, Lee Merritt, spoke frequently with Breitbart News and acknowledged that then-President Donald Trump had been helpful in the case,” noted Pollack.

In June of last year, Arbery’s mother, Wanda Cooper-Jones, publicly appreciated the compassion and concern former President Trump showed her family and to other families in similar circumstances.

“I was very, very emotional throughout the whole conference,” she told Fox News after Trump signed his executive order on police reform. “[Trump] was very compassionate. He showed major concern for all families. Not just one family, but for all families.”

“I can say that President Trump was very receiving. He listened and he addressed each and every family accordingly,” she added.

“A GREAT woman. Her son is looking down from heaven & is very proud of his wonderful & loving mom!!!” he tweeted.