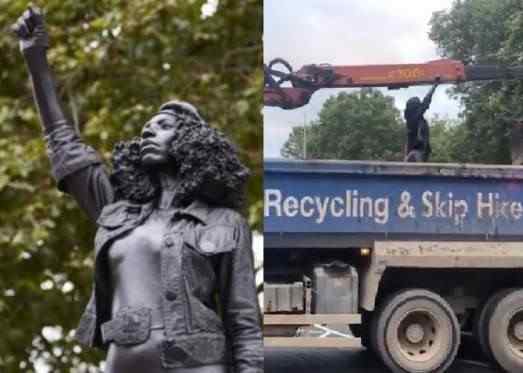 (Gateway Pundit) – An artist replaced a statue that was toppled in the UK last month with a resin statue of a Black Lives Matter protester who had climbed on top of the base for a photo following the vandalism — it was appropriately hauled off in a dumpster the next day.

“I understand people want expression, but the statue has been put up without permission,” the mayor of Bristol, Marvin Rees, said in a post on Twitter on Wednesday. “Anything put on the plinth outside of the process we’ve put in place will have to be removed.”

A crew came and took the statue down early Thursday morning. The Bristol City Council announced that they will hold the statue at a local museum for the artist to either come pick up or donate.

The resin statue, created by British artist Marc Quinn, featured a woman making the black power fist. The bronze statue that they had torn down was of merchant and slave trader Edward Colston, who is honored all over Bristol for the amount of money that he spent on charitable work in the area.

In 1808, David Hughson described Colston as “the great benefactor of the city of Bristol, who, in his lifetime, expended more than 70,000L. [£] in charitable institutions.”

Liberals kneeled before the statue and made the black power gesture after it was unveiled, and a brave woman filming them scolded them for their actions.

CNN reports, “the work, officially titled ‘A Surge of Power (Jen Reid) 2020,’ is intended to be temporary. The artist confirmed that he did not received permission from authorities to erect the statue. Should the artwork be sold, Quinn said that profits will be donated to two charities, chosen by Reid, that promote the inclusion of Black history in school curricula.”

The divisive and politically charged statue sparked elation from the left, and outrage from the right. Many called for the statue celebrating the violent movement to be torn down.