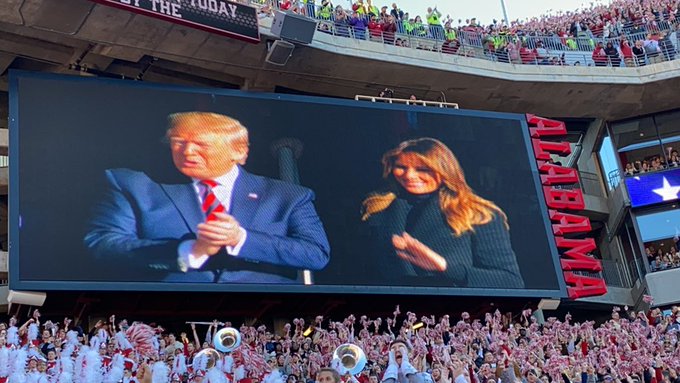 (Gateway Pundit) – President Trump arrived to cheers and chants of “USA! USA!” from a packed crowd of over 100,000 at Bryant-Denny Stadium for the LSU-Alabama college football game in Tuscaloosa, Alabama Saturday afternoon.

Trump and First Lady Melania took seats in a box on the LSU side of the field. Later the crowd gave Trump a standing ovation when he and Melania were shown on the Jumbotron.

Trump was cheered by a crowd outside the stadium as he arrived.

Inside the stadium, Trump was cheered and received with “USA!” chants.

THE CROWD ROARED FOR TRUMP!

Excerpt from pool report: “POTUS just came in and stood waving from a luxury box near midfield. Fans cheered loudly, some chanting “USA”.

UPDATE: Those at the game with the President:

Young Socialists and Democrats held a protest against President Trump’s appearance at the Alabama-LSU game on Saturday.

And unlike Trump supporters in any Democrat city — they didn’t get a beatdown.

Liberal Alabama.com felt this deserved a reporter at the scene.