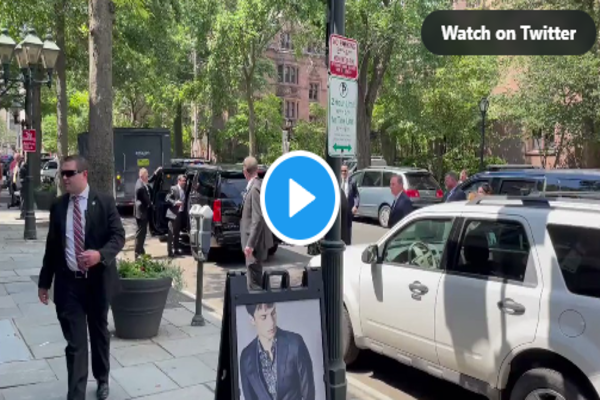 “Your husband is the worst president we have ever had,” a protester yelled at the first lady as she was walking into an ice cream store with Education Secretary Miguel Cardona and Connecticut Gov. Ned Lamont (D).

Jill Biden smiled and waved back at the protester, saying, “Thank you.” The protester then continued to repeat, “You owe us Gas Money,” before Biden went inside.

The president’s overall approval rating is currently at 30 percent, and only 34 percent approve of his job performance in Connecticut, according to a recent Civiqs survey.

The first lady was on a multi-state summer learning program tour with Cardona in Connecticut on Wednesday that later went through Michigan and Georgia.

The tour’s purpose was to highlight how the American Rescue Plan is funding summer education programs for children who fell behind in school during the pandemic.

Her husband, President Joe Biden, tested positive for the coronavirus the following day, but she continued on with the tour in Detroit and Athens, Georgia, on Thursday despite being in close contact with the president. She later tested negative.

Following the tour, the first lady then traveled to Wilmington, Delaware, while her husband stayed at the White House.

The first lady recently landed herself in some hot water after she compared Hispanic Americans to breakfast tacos. She later apologized for her remarks.

Jill Biden has joined her husband in suffering from abysmal approval ratings. She is currently sitting at a 34 percent approval rating, dropping 24 points since January 2021, according to a recent CNN/SSRS poll.