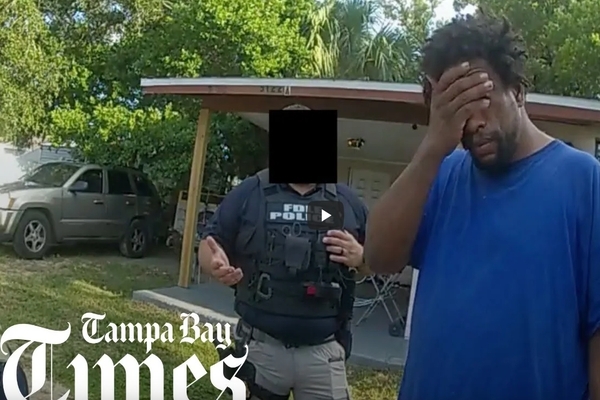 (breitbart) – Video shows several people in Hillsborough County, Florida, realizing they may be in trouble for allegedly casting a ballot as officials target alleged voter fraud.

The arrests took place on August 18 and were performed by state police and local officers, the outlet said, adding that among the 19 arrested were 12 registered Democrats.

The group faces up to five years in prison for allegedly registering and voting illegally.

Per the Times report:

They are accused of violating a state law that doesn’t allow people convicted of murder or felony sex offenses to automatically be able to vote after they complete their sentence. A 2018 state constitutional amendment that restored the right to vote to many felons excluded this group.

But, as the videos further support, the amendment and subsequent actions by state lawmakers caused mass confusion about who was eligible, and the state’s voter registration forms offer no clarity. They only require a potential voter to swear, under penalty of perjury, that they’re not a felon, or if they are, that their rights have been restored. The forms do not clarify that those with murder convictions don’t get automatic restoration of their rights.

In January, DeSantis proposed the election integrity unit to investigate and arrest people accused of voter fraud, according to Breitbart News.

In his State of the State address, DeSantis explained, “This will facilitate the faithful enforcement of election laws and will provide Floridians with the confidence that their vote will matter.”

A few months later, DeSantis signed a bill into law creating the Office of Election Crimes and Security that is operated under Florida’s State Department.

In March, several Florida counties launched investigations into whether convicted felons, who are not eligible to vote, did so during the 2020 presidential election, according to a report.