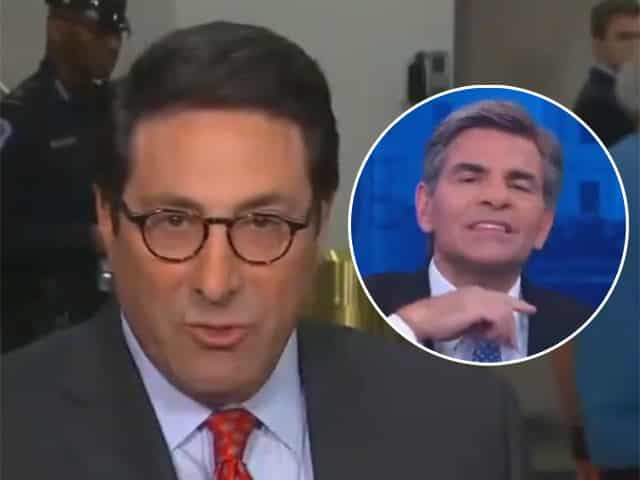 According to Tim Graham, executive editor of NewsBusters, Stephanopoulos was spotted on camera making the motion around 3:00 P.M. EST. The clip begins with a Capitol Hill reporter asking Sekulow for his thoughts on Attorney General William Barr, Sen. Lindsey Graham (R-SC), and renowned lawyer Alan Dershowitz having previously made the argument that abuse of power is impeachable.

“We’ve got something very different from what you’re hearing up here,” Sekulow begins.

“We’ve got lawyers that will be put forward when our side of the case goes that represents multiple schools of thought on what is an impeachable offense,” the president’s personal attorney continues. “They have one thing in common: that the actions alleged and the actions of the president do not reach that level — no matter which school of thought you’re on.”

“We’re not afraid to put out both of those schools of thought because our position is you still have to meet basic, fundamental constitutional obligations and they haven’t,” he concluded.

As Sekulow takes another question, Stephanopoulos orders staff situated off-camera to end the broadcast’s feed by making a throat-slitting gesture. The ABC News anchor then segues into a panel segment to discuss the Trump lawyer’s comments.