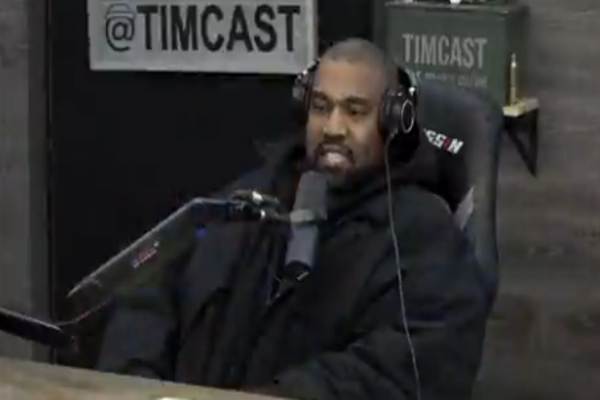 (breitbart) – Kanye West, the rapper and entrepreneur who has become infamous for his antisemitic views, walked out of an interview Monday evening with podcaster Tim Pool the moment the host mildly challenged his views on Jews.

The interview, which was streamed live on YouTube, included Holocaust denier Nick Fuentes and Milo Yiannopoulous, who has recently joined West’s entourage and nascent 2024 presidential campaign.

Pool allowed West to express his views, largely uninterrupted, for the first fifteen minutes of the broadcast. He claimed that his recent, controversial dinner with former President Donald Trump had been scheduled last month — apparently before West began making antisemitic comments such as the infamous “death con” tweet. The dinner was postponed until after the midterm elections; West confirmed that Trump did not know Fuentes.

West claimed that it was “beautiful” that people could see how Jews — whom he referred to as “Zionists” at one stage — cancel people.

Tim Pool then interrupted: “You went right into the antisemite thing … If you start bringing this up, you’re going to ask my opinion on it, I’m going to disagree with you.” West replied: “I don’t care about your opinion.”

He then claimed that “Jewish people allowed” then-Sen. Barack Obama (D-IL) to meet with the racist and antisemitic Nation of Islam leader Louis Farrakhan in 20025.

Pool expressed empathy for West’s experience of being canceled: “I think they’ve been extremely unfair to you.”

Fuentes interjected: “It is ‘them,’ though, isn’t it?”

“What do you mean it’s not?” West asked.

He then stood up and left the room. His entourage followed.

Luke Rudkowski, one of Pool’s co-hosts, said that West said as he was leaving: “You don’t believe in my truths.”

Pool reflected on West’s decision to leave. “I’m sorry, bro,” he said. “This is not a show where you come in and talk, by yourself, and say things that warrant questioning, at the very least. …

“All they did was remove themselves from the conversation.”