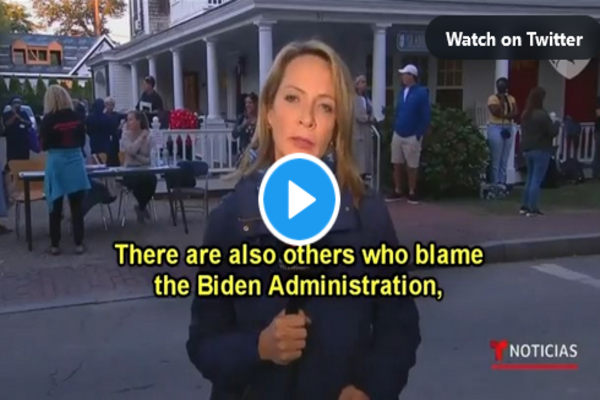 (breitbart) – A Spanish TV reporter for Telemundo said Martha’s Vineyard residents privately admitted to not wanting migrants on the island.

Speaking outside St. Andrew’s church where the 50 migrants that Florida Gov. Ron DeSantis (R) shipped up to the elite liberal vacation spot, Cristina Londoño Rooney of Telemundo said that residents refused to be interviewed on camera about their displeasure with the situation for fear of appearing “inhumane.”

“A furious man passed by just a short time ago. He said that his children had to leave this island because there are no jobs or housing, and now they bring these migrants over, deceiving them with those promises,” she said.

On Thursday, Martha’s Vineyard homeless shelter coordinator, Lisa Belcastro, lamented to reporters that the island does not have the facilities to house the migrants despite the fact that some of America’s wealthiest elites own multi-million-dollar vacation homes that are empty most of the year.

“At some point in time they have to move from here to somewhere else,” she told reporters. “We don’t have the services to take care of 50 immigrants. We certainly don’t have housing. We’re in a housing crisis as we are on this island, so we can’t house everyone here that lives here and works here. We don’t have housing for 50 more people.”

The sentiments about not having enough room and how the migrants need to be sent elsewhere appear to conflict with an official sign displayed in Martha’s Vineyard saying that the island residents stand in solidarity with immigrants and refugees.

In a tweet on Wednesday, Sen. Ted Cruz (R-TX) put this so-called “crisis” into perspective when he explained how 15,000 migrants flooded into Del Rio, Texas, in a single day.

“Folks on Martha’s Vineyard are describing the burdens from 50 illegal immigrants. To put that in perspective, the small town of Del Rio, TX has about 30,000 residents. I was there when 15,000 Haitian illegal immigrants were crossing in to Del Rio IN A SINGLE DAY. 15,000 > 50” he tweeted.