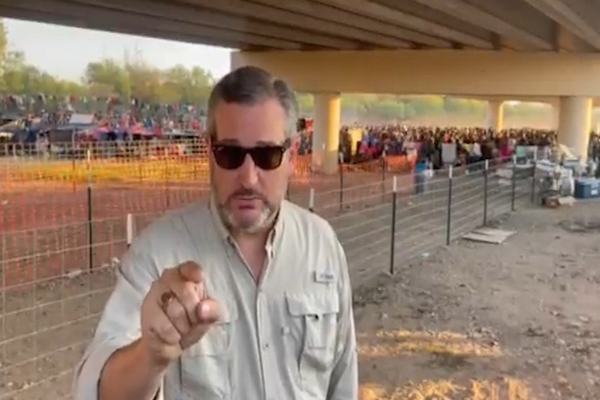 (dailywire) – Sen. Ted Cruz (R-TX) released a video on Thursday afternoon from his trip to Del Rio, Texas, where he observed what he said was more than 10,000 illegal aliens that had been apprehended by the U.S. Border Patrol.

“It’s a maddening crisis,” Cruz said from the border. “Just over a week ago, there were fewer than a thousand people here under the bridge, averaging between 700 and 1000. Then, on September 8th, the Biden administration made a decision to cancel deportation flights back to Haiti. The vast majority of these illegal immigrants crossing into Del Rio are from Haiti.”

“And [when the Biden administration] made that decision eight days ago, the 700 to a thousand people who were here discovered they could stay, they pulled out their cell phones,” Cruz continued. “They called their friends, they called their family, and eight days later, 700 people became 10,503.”

Cruz said that the situation was a “manmade disaster” that was the “result of political decisions” and that President Joe Biden could easily fix the problem by simply following the law and reinstating deportation flights back.

“When you have open borders, this is what you get,” Cruz concluded. “This is wrong. This is not humane. This is not compassionate. This is lawless, and it is inviting suffering. This needs to end.”