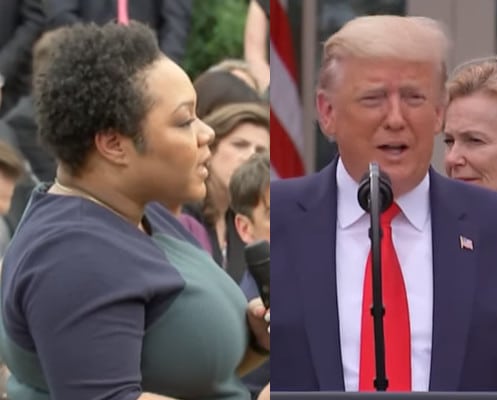 President Trump announced he was declaring a National Emergency today over the coronaviris.

The President made the announcement at 3 p.m. Friday in the Rose Garden.

Concerns about the virus have prompted massive closures across the country and a stock market rout, even though Trump has been ahead of the curve on preparing for the virus in most regards.

Trump and his administration banned flights from Europe earlier this week for the next 30 days.

During the press conference President Trump and his team took questions from the liberal media.

Of course, the foreign press was respectful — but the liberal US mainstream media hurled insults and attacked President Trump and his outstanding team.

NPR hack Yamiche Alcindor, who accused President Trump of being the leader of a White Nationalist party at a previous press conference, was ready to pounce on Trump when she had the opportunity.

Yamiche Alcindor: You say you don’t take responsibility but you did disband the White House pandemic office and the officials that were working in that office left this administration abruptly so what responsibility do you take to that and the officials that worked in office said the White House lost valuable time because it was disbanded. What do you think of that? President Trump: Well, I just think it’s a nasty question because what we’ve done is and Tony has said numerous times is we saved thousands of lives because of the quick closing. And when you say “me” I didn’t do it we have a group of people, I could perhaps ask Tony about that. I don’t know… You used to be with a different newspaper than you are now. You don’t think things like that happen? OK, please go ahead. (next question)

Yamiche’s only purpose in attending that presser was to attack the president.

Trump is right for labeling the horrid liberal mainstream media the “Ene-media.”