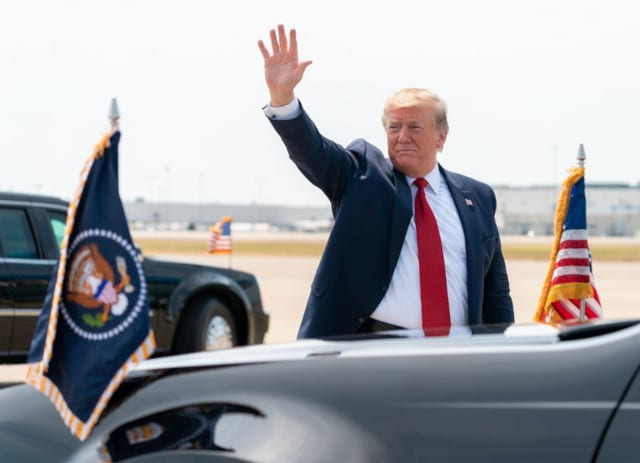 (Breitbart) – Special Adviser to the President Pam Bondi told Breitbart News that as Americans head home for Thanksgiving dinners with their families, the country needs to know how Democrats have abandoned helping solve Americans’ problems in favor of pursuing an increasingly unpopular impeachment agenda.

In fact, all year, Democrats have failed to help Americans on healthcare, infrastructure, jobs, and security. They have zero legislative accomplishments since taking the House majority but are instead obsessed with impeachment. Bondi said as Americans have Thanksgiving dinner with their families, they should look at the contrast between Democrats, who do nothing for America, and President Donald Trump and Republicans, who are solving Americans’ problems.

“The Democrats have failed to produce any evidence that the president did anything wrong,” Bondi said in an interview on Saturday with Breitbart News. “They are wasting time, taking awa, as I said, from the issues that Americans care deeply about like USMCA, securing our border, infrastructure, healthcare, tax cuts, things that affect everyday working Americans in this country that are being ignored by Adam Schiff for his dog and pony show, this sham of a proceeding. It’s outrageous, and the American people are seeing through it. Next week is a week to be with your family. It’s Thanksgiving. Look where Vice President Pence and Mrs. Pence are today—they’re in Iraq, they’re with our troops. You’ve seen that. That’s what people need to be looking at, and I hope every network around this country is carrying that and talking about what they’re doing. They’re over there being with the brave men and women who fight for our country every single day.”

Bondi’s comments came in an exclusive interview for Breitbart News Saturday on SiriusXM 125 the Patriot Channel that aired live on Saturday morning. It comes in the wake of the Democrats wrapping their latest public impeachment hearings this week after five more hearings—two on Tuesday, two on Wednesday, and one on Thursday—all of which, combined with the two the previous week, failed to produce any evidence of any crimes or impeachable offenses by President Donald Trump.

“Don’t forget about the secret hearings that they [Democrats] held in the bunker of the Capitol, which were completely absurd—they wouldn’t let Republican lawmakers in the door,” Bondi said. “They’ve had countless hours of testimony and they’ve run shady closed-door secretive hearings the entire process. Selective leaks, remember that? The entire time these secret hearings were going on and then the testimony they choose to make public is their best of their best—that’s what they choose to make public—and they’ve got nothing. They have zero evidence of wrongdoing by the president and it’s a political circus. Even before President Trump was elected, they have been trying to impeach him. It’s not going to work. This is going to continue for us for the next four years—it’s not going to stop. But we’re going to fight back, we’re going to go on offense, and they have absolutely nothing showing wrongdoing by our great president.”

Bondi said that despite the lack of evidence against President Donald Trump, the media and left are continuing to push for impeachment.

“They’ve done this from day one,” Bondi said. “They’re going to continue to do this. I was walking by seeing a headline on a newspaper when I listened to the testimony, I was listening to everything and I see this headline that was completely contrary to what the witness testified to. Some of these cable shows, they’re flashing up as everything is going on the thing they believe is the most damaging to the president, when in fact that’s not what the witness said. They’re taking selective clips because they’re trying to influence the American people. But you know what we’ve got on our side? The facts and the law. The law did not apply in this case because Adam Schiff ran a complete sham of a hearing, it was outrageous, he had, as you heard, unlimited time and our great Republican lawmakers had very limited time. He cut them off when they were saying things he didn’t want to come out in these hearings. So, I think when—it will, we all know that it’s going to go to the Senate—when it goes to the Senate, that’s when we’re going to hear the real facts. That’s when the witnesses we’ve all heard are going to testify. We’re going to hear the real truth about what happened in this sham. President Trump is having to deal with this every single day along with running the country. Look what he’s doing. But breaking news this morning, USMCA, one of the best trade deals ever and Pelosi just announced most likely now not going to happen until the next year. That’s shameful, shameful for Americans, and shameful for all our workers here in this country. They’re not going to stop doing this to President Trump, but he’s strong, he’s driven, and we have the truth on our side.”

Bondi was Attorney General of Florida from January 2011 to January 2019 and has now taken a position in Trump’s White House as Special Adviser to the President, handling impeachment messaging alongside former Treasury Department spokesman Tony Sayegh. Sayegh joined Breitbart News Saturday last weekend after the first hearings, laying out how the White House was confident. Now, Bondi’s interview this Saturday with Breitbart News details how even more confident the White House is now that House Intelligence Committee chairman Rep. Adam Schiff (D-CA) has blown everything he had and still produced no evidence of impeachable offenses. Bondi, who spent years as a prosecutor before she was first elected as Florida’s Attorney General, told Breitbart News Saturday that she has never seen anything like the way Schiff and Democrats have been running this “impeachment inquiry” against Trump.

“I go back to even before I was attorney general. I was a career prosecutor since I was in my early 20s, starting in misdemeanor court with traffic offenses,” Bondi said. “Let’s take it even one step down: If you got a ticket for allegedly running a stop sign, allegedly rolling through a stop sign and not coming to a complete stop, and you challenged that in court—that’s a civil infraction, it’s not even criminal—you would be afforded more rights than they have given the president of the United States of America. Adam Schiff is a lawyer and he knows this and he knows that the only way he can attempt to take down an American president and overthrow an election is by these sham proceedings. You’re absolutely right—we say due process but that’s what it means. Due process means you have the right, fundamental fairness, you have the right to confront your witnesses against you. You have the right to testify. You have the right to cross-examine witnesses, and hearsay would never be admissible.”

Bondi continued by noting that there is no way that a case like this would hold up in court.

“So let’s take this example a step further. So, someone says that you roll through a stop sign and you didn’t do it,” Bondi said. “Someone thinks you did, your neighbor thinks they saw you do it, so they call the police and say, ‘Hey, I saw Matt roll through a stop sign.’ Would the police ever charge you with that? Absolutely not. You have to have a direct witness. That’s what they’re doing here, and it’s even worse. It’s hearsay upon hearsay upon hearsay that would never be admissible to any citizen in our country. That’s what they’re trying to do. They’re not going to get away with it, they’re just not.”

Bondi added that since the facts are not on the Democrats’ side, and the public can see that. The polling is shifting aggressively against impeachment, especially among independent voters.

“The more they go on, the polls are getting better and better for us every single day,” Bondi said. “Nancy Pelosi needs to be very, very worried. This runaway train needs to stop. Schiff needs to tread very, very carefully in what he says and does in that final report.”

She said that because of this, the 31 Democrats who represent districts that Trump won in 2016 might want to consider breaking with House Speaker Nancy Pelosi when it comes to impeachment—especially since as a party the Democrats have achieved nothing, and they are all in on failure together.

“They need to be very careful because they’re in districts that President Trump won and President Trump will win again,” Bondi said. “They need to do the right thing. They’re going to be very, very vulnerable in the next election if they don’t. We’re talking about them voting on these articles of impeachment and what they’re going to do—they started off saying their main argument was quid pro quo. What did they do? The Democrats took this, they polled it, they had focus groups come in and say: ‘What do you think of quid pro quo?’ And what did the American people think? Ridiculous. It’s not going to fly. So then what did they do? They changed the charge to ‘bribery,’ which doesn’t even apply in this case, it’s so absurd. They changed it to ‘bribery’ because they think it’s more inflammatory against the president.”

Bondi also pointed to a recent Vanity Fair piece that warns Democrats against continuing down the highly unpopular impeachment path, while ignoring Americans’ actual problems. She said that if the Democrats go forward with their impeachment agenda, it will reflect badly on them as a “shameful” chapter in the history books upon their failure to remove Trump from office.

“I don’t know if you saw, but Vanity Fair had an article on independents, and independents, what do they have? Scandal-fatigue,” Bondi said. “People are over this and they see a political witch hunt and they see a sham that’s been going on day in day out when we could be working on tax cuts, we could be working on USMCA. They could be doing so much good for their constituents in the states where they were elected, yet they’re spending all their time listening, going through hearing after hearing with absolutely nothing there. Going back to being in law school, in constitutional law on what it takes to impeach an American president, this is really shameful for our country and this is going to go down that way for Democrats in the history books, how horrible this is what they’re attempting to do and not going to get away with.”

LISTEN TO PAM BONDI FROM THE WHITE HOUSE ON BREITBART NEWS SATURDAY: