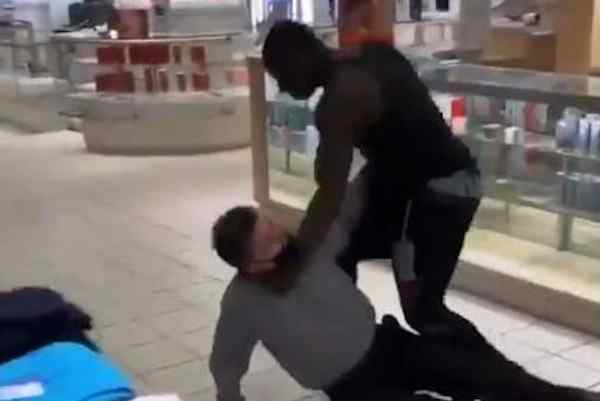 (Gateway Pundit) – This clip has mega millions of views, 5 million on Snapchat and millions on Twitter from several accounts.

A young black man was filmed beating the crap out of an older man inside the just re-opened Macy’s at the Genesee Valley Center mall in Flint, Michigan.

The assault happened on on Monday or Tuesday. The camera caught the face of the perpetrator perfectly.

In the video that was filmed by the black man’s friend — he sneaks up behind the man and smacks in in the head.

The initial reporting on line claimed the older man allegedly randomly said the n-word to some muscular young man in Macy’s — other social media comments say it started because the younger man wasn’t wearing a mask, just like the Flint murder at the dollar store.

This is a brutal assault.

Isn’t it interesting that you rarely if ever see a burly white man beating the hell out of an unsuspecting older black man?

The incident, posted on Twitter, Facebook, and YouTube, shows an unidentified white man wearing a mask and speaking on a cell phone inside a Macy’s department store at the Genesee Valley Center mall when a black man approaches him and punches him. The white man, who is knocked to the ground by the punch, turns and asks, “what are you doing that for?” “I didn’t touch you… I’m sorry,” he said, as he attempts to crawl away but is instead punched two more times.

This looks like a Macy’s employee with black slacks and black shoes — he’s obviously not on his cell phone, as some comments claim.

UPDATE — The white male in the video is confirmed to be a Macy’s employee who was folding shirts before the violent attack.