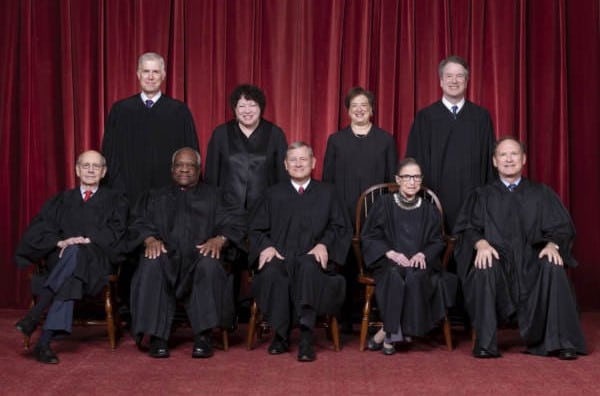 (Gateway Pundit) – In a 5-4 decision, a divided U.S. Supreme Court ruled that foreigners who are in America illegally can be prosecuted for the crime of identity theft.

While the ruling seems like a no brainer, the court was divided because the case involved the Immigration Control and Reform Act, which says any information provided on an I-9 work form can’t be used by law enforcement in any way — and that includes as evidence in a criminal case.

“The Immigration Control and Reform Act (IRCA) makes it a federal crime to lie on the I-9 work authorization form, while limiting how the false information can be used,” Fox News reported. “Federal law also says information “contained in” the I-9 cannot be used for law enforcement other than specified exceptions — but the Supreme Court ruled that if workers use the same information in tax documents, they can face charges.”

“Although IRCA expressly regulates the use of I–9’s and documents appended to that form, no provision of IRCA directly addresses the use of other documents, such as federal and state tax-withholding forms, that an employee may complete upon beginning a new job,” Justice Samuel Alito wrote in the court’s majority opinion. He was joined by fellow conservatives Clarence Thomas, John Roberts, Neil Gorsuch, and Brett Kavanaugh.

The IRCA also forbids state charges or civil cases against “those who employ, or recruit or refer for a fee for employment, unauthorized aliens,” but Alito noted that this “makes no mention of state or local laws that impose criminal or civil sanctions on employees or applicants for employment.”

The Kansas Supreme Court had ruled in a case that charges were improper because “[t]he fact that this information was included in the W–4 and K–4 did not alter the fact that it was also part of the I–9.”

Alito said that was a incorrect ruling.

“Taken at face value, this theory would mean that no information placed on an I–9 — including an employee’s name, residence address, date of birth, telephone number, and e-mail address — could ever be used by any entity or person for any reason,” he wrote.