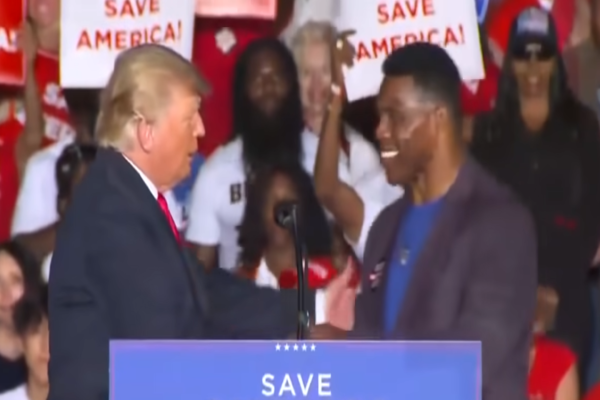 (breitbart) – Republican Herschel Walker continues to hold a slim lead over Sen. Raphael Warnock (D-GA) in the race for U.S. Senate in Georgia, according to a poll published Thursday.

Five percent of respondents said they were undecided.

The poll, conducted September 6 and 7, is the latest in a string of polls that have shown Walker with a slight edge over Warnock. The results are also nearly the inverse of those found in the previous Fox 5 Atlanta and Insider Advantage poll, taken in July, which showed Warnock up by three points.

The polling numbers suggest Walker, a well-liked Georgia football legend, has picked up momentum heading into the final couple months of the race.

This latest poll comes right as Walker launched his “Unite Georgia” statewide bus tour September 7 and right after he celebrated the start of his alma mater University of Georgia’s football season, appearing on the field after the first game, as well as on a bus alongside his Heisman Trophy, the prestigious award he won in college.

The poll also comes after Warnock, a proponent of wiping out student loans, publicly celebrated President Joe Biden’s announcement that the president will do just that to the tune of up to $10,000 to $20,000 for millions of Americans. Warnock, alongside Senate Majority Leader Chuck Schumer (D-NY) and Sen. Elizabeth Warren (D-MA), led the push for Biden to act on student debt.

Walker blasted Warnock for his praise of the student loan cancellation plan, lamenting amid forty-year-high inflation and analyses that American taxpayers will bear the brunt of the student loan erasure costs, Warnock’s “reckless spending knows no limits.”

While the Senate race remains tight, the poll found Gov. Brian Kemp (R) widening his lead over Democrat gubernatorial candidate Stacey Abrams. Kemp, who beat Abrams by a razor-thin margin in 2018, is now ahead of his opponent by eight points in their rematch, according to the poll.

Kemp leads “in every age group,” the pollster noted, while Walker holds a strong lead among those age 40 to 64 and Warnock leads among younger voters and senior voters.

The poll was conducted among 550 likely voters and had a margin of error of 4.2 percent.