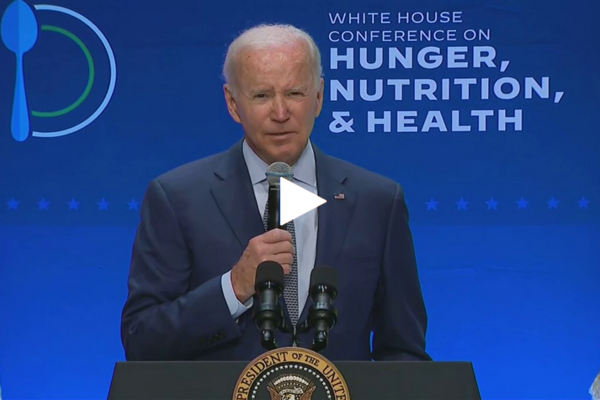 Eight of the moments have come after Biden has completed a speech.

The president’s appearance of being disoriented has raised concerns that Biden, 80, is too old to run for a second term. If Biden won reelection in 2024, he would be 86 years old, the oldest president in U.S. history.

At a Monday Toys for Tots event with the United States Marine Corps Reserve in Arlington, Virginia, Biden asked a child which way he should exit the stage after completing his speech:

After speaking at the Global Fund Conference in New York, Biden walk to one side of the stage, uncertain if he should exit left or right:

At a Pittsburgh rally, Biden first looked to exit left before quickly walking to the right after performing a spin around:

President Joe Biden welcomed former President Barack Obama to the White House to celebrate the Affordable Care Act. After the event, Biden appears lost and frustrated on stage that nobody was speaking to him. The attendees gathered around Obama:

On the White House grounds, Biden appears to not know which way he should walk to enter the building. He first walked one way before turning around to follow first lady Jill Biden in the opposite direction:

Video footage shows Biden attending an event at Brookland Middle School in Washington, DC, with Jill Biden. During Jill Biden’s remarks, Biden wonders off to the right and out of the frame:

After a White House event in the Rose Garden, Biden appears to ask Jill Biden which way he should walk upon the completion of the event:

After a relaunch of the “Cancer Moonshot” initiative, Joe Biden appears confused about which way he should exit the stage. He first walked to the right side near Jill Biden before quickly turning around to exit left:

After speaking at FEMA’s headquarters, Joe Biden appears to aimlessly walk off while FEMA Administrator Deanne Criswell appears to reach out, failing to gain his attention:

After arriving in Israel, Biden appears lost on the tarmac with reporters looking to take a photo of the receptive delegation: