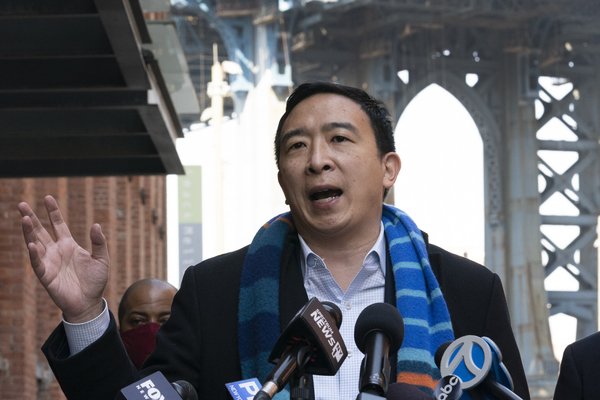 (breitbart) – New York City mayoral candidate and former Democratic presidential candidate Andrew Yang backtracked Wednesday after he tweeted earlier in the week to support Israel as it continues to be bombarded by rockets fired by Palestinian terrorists.

As Breitbart News reported earlier this week, Yang took a traditionally pro-Israel and anti-terror view, as the aspirant mayor of a city with a large, deeply-rooted Jewish community and direct, painful experience with radical Islamic terror attacks.

“I’m standing with the people of Israel who are coming under bombardment attacks, and condemn the Hamas terrorists. The people of NYC will always stand with our brothers and sisters in Israel who face down terrorism and persevere,” he tweeted Monday.

But “progressive” Democrats attacked Yang, calling him. “white supremacist” and urging New Yorkers to oppose him. Rep. Alexandria Ocasio-Cortez (D-NY) even encouraged Muslims not to host him at communal religious celebrations.

On Wednesday, in the face of criticism from anti-Israel and pro-Palestinian activists in his own party, Yang backed down:

“Support of a people does not make one blind to the pain and suffering of others,” Yang wrote. “Again, most everyone simply wants to be able to live and pray in peace.

“And that is what we want as well. I join with millions around the world in praying that the current situation be resolved as quickly as possible, peacefully and with minimal suffering.

“For those who have spoken to me on this — thank you. Continue to believe in humanity.”

Joel B. Pollak is Senior Editor-at-Large at Breitbart News and the host of Breitbart News Sunday on Sirius XM Patriot on Sunday evenings from 7 p.m. to 10 p.m. ET (4 p.m. to 7 p.m. PT). He is the author of the new e-book, The Zionist Conspiracy (and how to join it). His recent book, RED NOVEMBER, tells the story of the 2020 Democratic presidential primary from a conservative perspective. He is a winner of the 2018 Robert Novak Journalism Alumni Fellowship. Follow him on Twitter at @joelpollak.