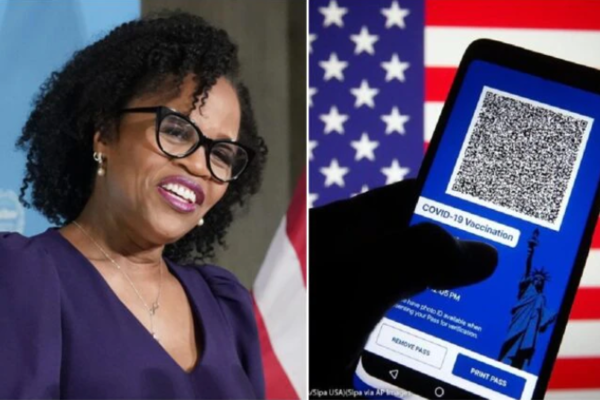 (bigleaguepolitics) – Acting Mayor Kim Janey of Boston, Mass. is coming out forcefully against vaccine passports in her city after New York City announced their implementation of such a system.

Janey pointed to the “long history” of people “needing to show their papers” in the U.S. and how such practices have typically been exclusionary and discriminatory against people of color.

“During slavery, post-slavery, as recent as, you know, what the immigrant population has to go through here, we’ve heard Trump with the birth certificate nonsense,” Janey said to WCVB.

“Here, we want to make sure that we are not doing anything that would further create a barrier for residents of Boston or disproportionally impact BIPOC communities,” she added.

Janey maintains that she is not anti-vaccine. She just wants to partner with community groups to make it available to Boston residents on a voluntary basis.

“As it relates to people who want to encourage their workforce to get vaccinated, we certainly support that,” she said.

“We have much more work to do to make sure that everyone can get the vaccine and we will continue to focus on that,” Janey added.

She later released a public statement that reiterated her thoughts.

“Earlier today, I pointed out several hurdles facing communities of color with lower vaccination rates,” Janey’s statement read. “These hurdles should not be excuses, but we must consider our shared history as we work to ensure an equitable public health and economic recovery.”

“But we are still well below threshold levels that have guided policy decisions throughout the pandemic,” the statement noted. “Work with our business community will continue, as we learn to live with COVID-19.”

Big League Politics has reported on the Biden administration’s use of unconstitutional and immoral coercion to force vaccine shots into as many Americans as possible:

“As the Coronavirus vaccine has been distributed en-masse across the United States, White House officials have yet to be satisfied, making consistent demands that more Americans get vaccinated. Currently, 37.5% of Americans have been fully vaccinated against COVID-19, and nearly half the country (47.5%) has received at least one dose.

In an effort to push more vaccination, Joe Biden recently announced that rideshare companies Uber and Lyft will be giving free rides for anyone who chooses to get vaccinated between May 24th and July 4th. With the last free rides taking place on the 4th, Lyft and Uber are seemingly trying to help Biden reach his goal of allowing small outdoor gatherings by Independence Day. Biden stated that he aimed to have 70% of Americans receive at least one shot by that time.

This change in tone comes after a tweet of Biden on May 13th, which threatened endless masking for Americans who elect to not take a COVID-19 vaccine.

Talks of forced vaccination have been prolific around the country, with many arguing that it would be entirely legal to do so. Currently, not a single COVID-19 vaccine has been approved by the FDA.

Threats and bribes have been repeated by Biden and many others in an attempt to encourage mass vaccination. In spite of this, nationwide trends have pointed to a recent slowdown in Americans receiving the vaccine, with supply often outpacing demand.

While it is no secret that medical tyranny in America continues to accelerate, the American spirit is not yet dead.”

Janey’s response to mandatory vaccine tyranny is refreshing. It appears not every liberal city official is fully on board with the psychotic technocracy pushed by the globalist elite.