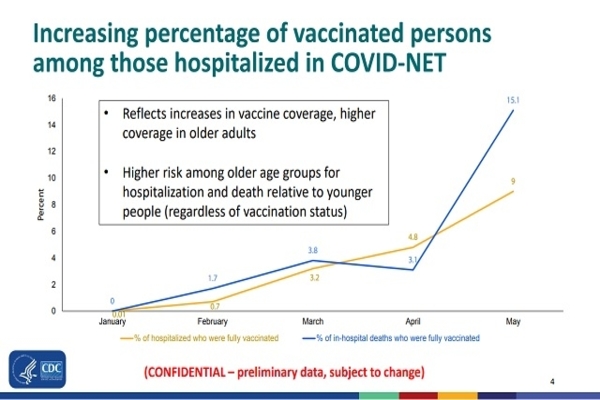 (IL) – Anthony Fauci, Surgeon General Vivek Murthy and CDC director Rochelle Walensky were lying to the public when they said over 99% of patients dying in hospitals were unvaccinated, according to the CDC’s own data shared Thursday night by the Washington Post.

Israel, Iceland and other highly-vaxxed nations are all rushing to lock down a second time and rush out boosters but our public health “authorities” and Biden himself have spent the last two weeks claiming the “vaccines” are 99.5% to 100% effective.

Now, they’re starting to admit that was a load of crap (but they’re still fearmongering that we’re all going to die).

The data and studies cited in the document played a key role in revamped recommendations that call for everyone — vaccinated or not — to wear masks indoors in public settings in certain circumstances, a federal health official said. That official told The Post that the data will be published in full on Friday. CDC Director Rochelle Walensky privately briefed members of Congress on Thursday, drawing on much of the material in the document.

One of the slides states that there is a higher risk among older age groups for hospitalization and death relative to younger people, regardless of vaccination status. Another estimates that there are 35,000 symptomatic infections per week among 162 million vaccinated Americans.

The document outlines “communication challenges” fueled by cases in vaccinated people, including concerns from local health departments about whether coronavirus vaccines remain effective and a “public convinced vaccines no longer work/booster doses needed.”

[…] Matthew Seeger, a risk communication expert at Wayne State University in Detroit, said a lack of communication about breakthrough infections has proved problematic. Because public health officials had emphasized the great efficacy of the vaccines, the realization that they aren’t perfect may feel like a betrayal.

“We’ve done a great job of telling the public these are miracle vaccines,” Seeger said. “We have probably fallen a little into the trap of over-reassurance, which is one of the challenges of any crisis communication circumstance.”

The CDC’s revised mask guidance stops short of what the internal document calls for. “Given higher transmissibility and current vaccine coverage, universal masking is essential to reduce transmission of the Delta variant,” it states.

The document makes clear that vaccination provides substantial protection against the virus. But it also states that the CDC must “improve communications around individual risk among [the] vaccinated” because that risk depends on a host of factors, including age and whether someone has a compromised immune system.

The document includes CDC data from studies showing that the vaccines are not as effective in immunocompromised patients and nursing home residents, raising the possibility that some at-risk individuals will need an additional vaccine dose.

The vaccines are “not as effective” in the people who would theoretically need them most.

Another victory for our public health “authorities”!