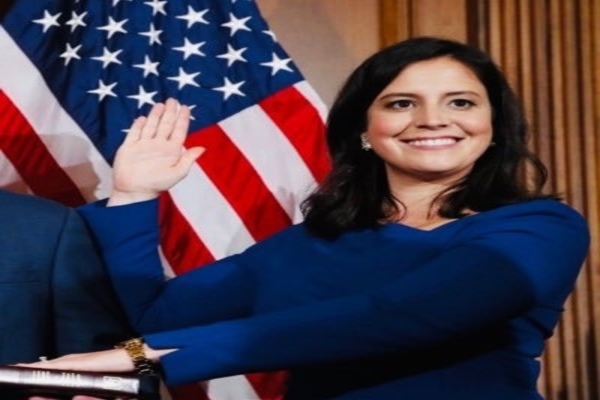 (breitbart) – Deputies of Rep. Elise Stefanik (R-NY) are swatting down claims by pro-migration liberals that she helped cause the racist, anti-migrant shootings in Buffalo, New York. “Any implication or attempt to blame the heinous shooting in Buffalo on the Congresswoman is a new disgusting low for the Left, their Never Trump allies, and the sycophant stenographers in the media,” said Alex DeGrasse, a senior adviser to Stefanik. He continued:

This is Joe Biden’s border crisis and crime crisis across America and the Left and their allies in the media will do anything to help Joe Biden pass the buck. Congresswoman Stefanik will never stop fighting to secure our borders and secure our elections.

The shooting was an act of evil and the criminal should be prosecuted to the fullest extent of the law.

Despite sickening and false reporting, Congresswoman Stefanik has never advocated for any racist position or made a racist statement.

She opposes mass amnesty for illegal immigrants and Joe Biden’s wide open border. Like the vast majority of Americans, she opposes giving illegal immigrants the right to vote which NY Democrats support and have made legal in New York City. She strongly supports legal immigration and is one of the national leaders credited with diversifying the Republican Party through candidate recruitment and messaging.

We thank the groveling hacks in the media for reminding voters that Republicans oppose amnesty and will secure the border while Democrats support mass amnesty and voting rights for illegals.

Stefanik chairs the conference committee which represents all GOP members in the House. That makes her a leading spokeswoman in the 2022 elections, where the GOP’s gains are partly fueled by the GOP’s promise to reverse President Joe Biden’s policy of not enforcing the popular laws that bar the inflow of foreign workers into Americans’ jobs and communities.

The anti-Stefanik criticism includes this post by the Washington Post, where a reporter who used to cover immigration issues wrote a passive-voice, unattributed lead:

Rep. Elise Stefanik (R-N.Y.), the No. 3 House Republican, and other GOP lawmakers came under scrutiny Sunday for previously echoing the racist “great replacement” theory that apparently inspired an 18-year-old who allegedly killed 10 people while targeting Black people at a supermarket in Buffalo.

But the Washington Post report quickly deflated itself, saying, “While Stefanik has not pushed the theory by name, she and other conservatives have echoed the tenets of the far-right ideology as part of anti-immigrant rhetoric that has fired up the Republican base ahead of the midterm elections.”

Stefanik is facing the same someone-somewhere-claimed charges from her regional newspaper, the Times Union wrote May 15:

Before an 18-year-old man went to a Buffalo supermarket Saturday and killed 10 people and injured three in a mass shooting that officials have described as fueled by racism, U.S. Rep. Elise Stefanik and other prominent Republicans had been accused of using language that tacitly aligns with “replacement theory,” which the attacker allegedly cited numerous times in an online manifesto, according to several media descriptions of the post.

The newspaper is an advocate for cheap labor migration that would help business groups by suppressing Americans’ wages and spiking housing prices. In 2021, for example, the paper’s editorial board wrote:

America flourished because immigrants contributed to its labor force and its culture of innovation and entrepreneurship. Today, according to the American Immigration Council, they make up over a third of the farming, fishing, and forestry workforce, and one-fourth of those working in computer and math sciences. Over four million immigrants work in the health care and social service industry. In many cases, they are doing jobs American citizens don’t want to do.

It is in this country’s best interests to bring those millions of people who are here illegally but living honest, productive lives out of the shadows and give them a path to citizenship — an idea even some Republican lawmakers once supported before Mr. Trump and his ilk poisoned the debate.

Stefanik’s pro-migration record has done little or nothing to prevent the media criticism of Stefanik. For example, in March 2021, she voted for a bill that would provide farm investors with an unlimited pool of cheap foreign labor and also provide the Democratic Party with a new stream of poor legal immigrants.

In the 2022 election, Stefanik is zig-zagging between the party’s pro-migration and pro-American wings. In 2021 and 2022, amid their differences, the two wings have blocked most of the Democrats’ schemes to expand the flow of white-collar and blue-workers into the United States. In early May, the two wings also announced a consensus plan for border fixes by a GOP-majority Congress in 2023.

The “top-polling issues are inflation, the economic crisis as far as labor shortage and workforce development, the crime crisis as well, the border security crisis as well,” Stefanik told the Hill. “On all of those issues we have been very disciplined on messaging, and the polling shows that we maintain double-digit leads on every single issue.”