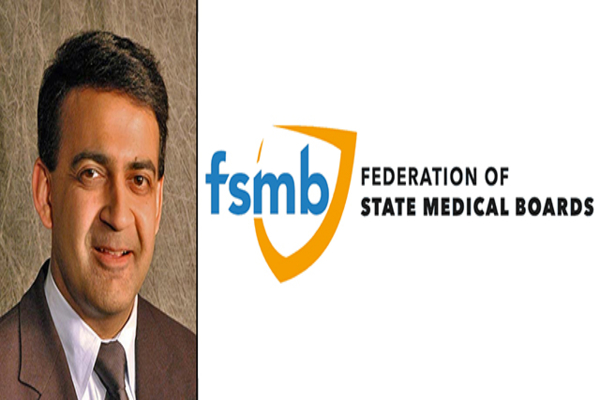 (IL) – The Federation of State Medical Boards under president and CEO Humayun Chaudhry sent out a statement last week threatening doctors that they may lose their medical licenses if they spread “misinformation” about covid vaccines.

The Federation of State Medical Boards warned July 29 that physicians and other healthcare professionals could be at risk of losing their medical licenses if they spread COVID-19 vaccine misinformation on social media, online and in the media.

“Due to their specialized knowledge and training, licensed physicians possess a high degree of public trust and therefore have a powerful platform in society, whether they recognize it or not,” FSMB said. “They also have an ethical and professional responsibility to practice medicine in the best interests of their patients and must share information that is factual, scientifically grounded and consensus-driven for the betterment of public health.”

They’re ordering doctors not to step out of line and do research for themselves on how they can best help their patients but instead just blindly follow whatever the medical establishment tells them.

Remember when the consensus was to put everyone under medically-induced comas and on ventilators and it killed some 85 percent of patients who received the “treatment”?

That could still be the standard today if Chaudhry’s consensus-based rules were widely enforced.

The statement went on to say that spreading “inaccurate” COVID-19 vaccine information “threatens to further erode public trust in the medical profession and puts all patients at risk.”

Is pulling doctors’ licenses for disagreeing with you really going to increase “public trust” in the medical profession?

The FSMB is aiming to remind physicians that words matter, that they have a platform, and that misinformation and disinformation — especially within the context of the pandemic — can cause harm, said president and CEO Humayun Chaudhry, DO. “I hope that physicians and other licensees get the message,” he added.

Vaccine resistance and hesitancy across the country have concerned the group, noted Chaudhry, as have reports of disinformation and misinformation being spread by physicians.

Because of the somewhat stagnant national vaccination rate and spreading Delta variant, Chaudhry is “really concerned” about more mutations and variants emerging, he said, “to the point where we may have a situation in hand where the vaccine isn’t even effective.” The U.S. is “not there now,” he added, but the vaccines are a key piece in preventing that.

“When the state boards get a complaint, they will investigate and if they determine there’s grounds for taking action, they will,” he said. Such actions could range from reprimanding physicians in a phone call, to license suspension or revocation.

According to the head of the CDC, the vaccines no longer prevent transmission of covid.

Doctors in Israel, one of the most vaccinated countries in the world, are reporting similar.

Many doctors are concerned the vaccines may be causing new variants and could lead to antibody-dependent enhancement.

Pulling doctors’ medical licenses for pointing this all out is not going to make these issues disappear.