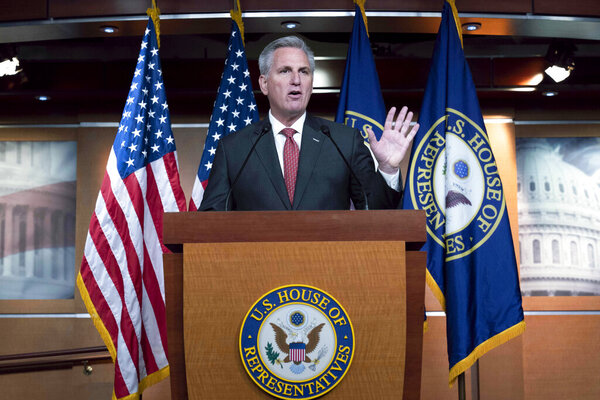 The McCarthy post comes in the wake of Monday night’s outrageous and unprecedented raid of former President Trump’s private residence at Mar-a-Lago. The next day the feds seized Rep. Scott Perry’s (R-PA) cellphone.

“If you are an elected Republican, and you are staying quiet while Democrats in Washington are abusing their power,” McCarthy wrote, “you are the very reason they think they can get away with it. NOW is the time to speak up and be LOUD!”

For the last five and six years, we have seen local and federal law enforcement, along with the Democrat party and their propagandists in the corporate media, launch one hoax after another at Donald Trump. Everything from the Russia Collusion Hoax, which was orchestrated with the help of the FBI, to the first impeachment hoax to the second impeachment hoax to the January 6 hoax. … On top of that, Trump’s been falsely accused of shady business dealings, not paying his taxes, and on and on and on…

It’s just one lie, one failed frame-job after another…

Unprincipled “republicans” like outgoing Rep. Liz Cheney (R-WY) just don’t care. They are political animals out only for revenge and power. The idea that the crocodile will one day turn on them (and it will) doesn’t matter. They are so shortsighted and bitter that it doesn’t matter what norms are shattered, how the Constitution is shredded, or the evil being done by a politicized law enforcement institution. All they care about is getting their revenge on Trump.

Good heavens, even former Gov. Andrew Cuomo (D-NY), a top Democrat just two years ago, is horrified by the raid on Trump’s home. Fortunately, some people, even some Democrats, are not so blinded by hate and ideology that they can’t see where this slippery slope leads to in the future.

In their zeal to frame Trump, Democrats have politicized impeachment and the justice system. So what’s to stop Republicans from doing the same to them?

Nevertheless, one thing I’m enjoying about the Biden Era is how normalcy has returned to America.