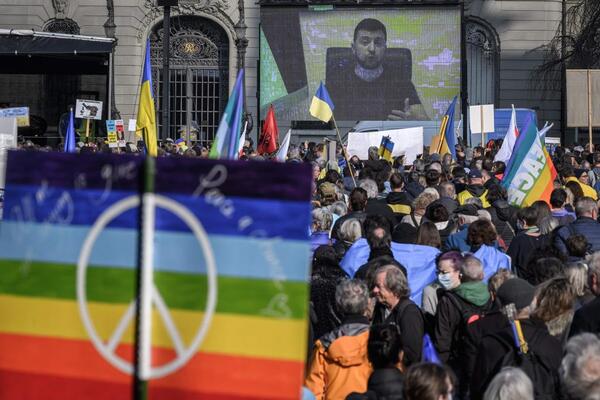 (breitbart) – Protesters at an event in Berlin have demanded that Ukraine is armed in order to allow the Russian-occupied city of Mariupol to host a Pride parade.

Pro-LGBTQIA2S demonstrators at a Pride event in Berlin have demanded that weapons are sent to Ukraine in order to enable the country’s rulers to liberate the port city of Mariupol and host a Pride Parade there.

The Berlin-based event, which took place on Saturday, was one of many Christopher Street Day demonstrations across Europe, with the pan-European celebration occurring annually in memory of the Stonewall Riots.

According to a report by broadcaster Rundfunk Berlin-Brandenburg, police said around 350,000 individuals took part in the protest, which this year reportedly centred around a “strong signal for diversity, freedom and respect and against hate, war and discrimination”.

However, for at least some protesters at the event in the German capital, sending a “strong signal” against war included demanding Ukraine be sent more weapons.

More specifically, the protesters held up signs demanding that arms are delivered to the country in order to allow Mariupol to host a Pride parade.

“ARM UKRAINE,” the banner — which was written in English — read, adding: “MAKE PRIDE IN MARIUPOL POSSIBLE.”

Others taking part in the protest waved Ukrainian flags and wore Ukrainian colours — though others opted instead to wear dog masks, chains, and various other comparatively apolitical accoutrements.

While officials in Germany have come under fire over just exactly how much they are supporting Ukraine in its ongoing war with Russia, what was made extremely clear on Saturday was that the German political class is in lockstep with the demands of LGBTQIA2S activists taking part in the day’s events.

For example, the rainbow flag of the LGBT community was reportedly flown from the Bundestag, Germany’s federal parliament, for the first time on the day of the march.

Other federal buildings also opted to display the banner, with the country’s interior ministry — which is run by the allegedly Antifa-linked politician Nancy Faeser — and defence ministry opting to fly the flag, as did the Reichstag building.

Meanwhile, leftist Berlin mayor Franziska Giffey declared that her city “is and will remain the rainbow capital”, demanding that all citizens of Germany “resolutely oppose” what she described as “hate and exclusion”.

Whether or not the German capital is or will remain the “rainbow capital” remains to be seen; certainly it seems unclear whether the city, or indeed Germany as a whole, will remain under the control of Giffey and Faeser’s leftist Social Democratic Party (SPD).

Being at the head of the country’s ruling coalition that has so far botched the handling of the country’s gas, inflation, and immigration crises, the SPD has now seen its popularity plummet nationwide to 18 per cent.

This is compared to 26 per cent of the vote share during last year’s election, which resulted in the party taking power alongside the far-left Greens and liberal Free Democrats.

Meanwhile, both the centrist Christian Democratic Union (CDU), formerly led by Angela Merkel, and right-wing populist Alternative für Deutschland (AfD) have gained favour with the public, with the former polling at 27 per cent and the latter at 12 per cent.