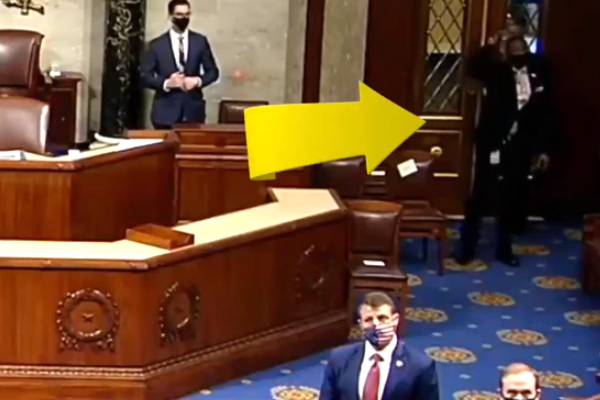 (bigleaguepolitics) – New footage has emerged of the officer who executed patriotic Air Force veteran Ashli Babbitt looking unhinged and trigger happy throughout the mostly-peaceful protest inside of the U.S. Capitol on Jan. 6.

The killer has been protected by the highest levels of government since he executed Babbitt in cold blood. This footage shows exactly how bloodthirsty the man was on Jan. 6:

Big League Politics has reported on the Babbitt family’s quest for justice since Jan. 6 as the family and patriots nationwide demand answers and justice for what happened that day:

“The family of late Trump supporter Ashli Babbitt is filing a civil lawsuit against the U.S. Capitol police after she was killed by a uniformed officer who shot the unarmed patriot.

The officer, whose identity has been shielded from the public by deep state forces, will not be charged for killing Babbitt with gun fire in the Capitol. The man shot Babbitt in close quarters with many people nearby, and, miraculously, his recklessness did not result in other protesters being hurt or killed.

“The family and I were disappointed in the Department of Justice’s decision on this, but my role is really to bring a civil action and in that way, vindicate her rights,” Babbitt family attorney Terry Roberts said during a Monday appearance on Newsmax.

Roberts explained that the Babbitt family is outraged at the Department of Justice (DOJ) protecting Babbitt’s killer. He noted that the officer “could clearly see that she was not armed” and that he “required willfulness” and failed to give any warning before the shooting.

“This is a situation in which the officer could have easily arrested her if he had grounds to arrest her without using deadly force,” he said. “This was an egregious act of excessive force.”

Roberts noted that the officer is likely being protected because he killed a Trump supporter. Trump supporters have endured an incredible amount of systemic oppression since the Jan. 6 mostly-peaceful protest against voter fraud erupted into a brouhaha inside the Capitol.”

While most cowardly Republicans have been silent and are happy to allow the injustice to go unavenged, Rep. Paul Gosar (R-AZ) has led the charge calling for Babbitt’s killer to be exposed and face repercussions for his heinous actions.

Millions of Americans will have to follow in Gosar’s lead to demand justice for Babbitt and make sure that her killer and other federal tyrants are held fully accountable, or Americans will shame their heroic ancestors.