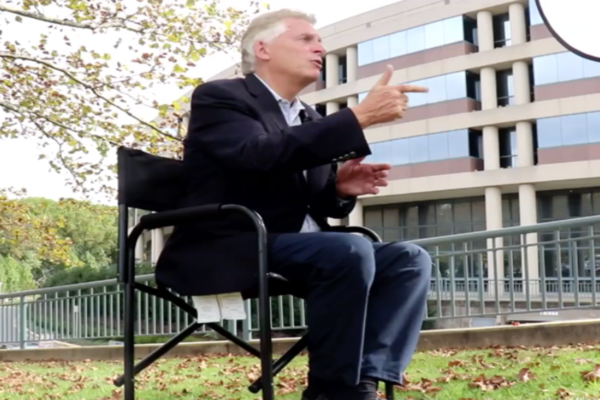 (Breit Bart) – Virginia Democrat Terry McAuliffe (D) is experiencing a wave of mockery on social media over a viral photo showing five individuals claiming to be supporters of his Republican challenger Glenn Youngkin, holding tiki torches outside of a campaign bus — an obvious nod to Charlottesville and white supremacy — as many surmise it is nothing more than a stunt by the Democrat’s supporters days before Election Day.

“These men approached @GlennYoungkin’s bus as it pulled up saying what sounded like, ‘We’re all in for Glenn.’ Here they are standing in front of the bus as his campaign event at Guadalajara [email protected],” NBC 29’s Elizabeth Holmes said alongside a photo showing five individuals wearing khaki pants, white shirts, and baseball hats holding tiki torches in front of Youngkin’s bus — an attempt to drive the false narrative that Republicans embrace and support white supremacy. One of the supposed supporters standing in the picture is black:

“Hey look, it’s the FBI,” one user said as another described the men as “Democrat operatives.”

“I badly need to see the internal McAulliffe[sic] polling that led them to make this decision,” another added as memes and takes mocking McAuliffe and Democrats began pouring in:

Christina Freundlich, spokeswoman for McAuliffe, tweeted about the viral image on social media.

“The Unite the Right rally was one of the darkest days in the Commonwealth’s history. this is who Glenn Youngkin’s supporters are,” she claimed as social media users continued to mock McAuliffe’s campaign:

The Unite the Right rally was one of the darkest days in the Commonwealth’s history. this is who Glenn Youngkin’s supporters are pic.twitter.com/OpJ55r0AMr

“This is disgusting and disqualifying,” she said:

This is disgusting and disqualifying. https://t.co/EJ9Fk7OeTE

Friday’s RealClearPolitics’ average shows the gubernatorial race tightening the final days, with Youngkin having a 0.9 percent edge over McAuliffe.