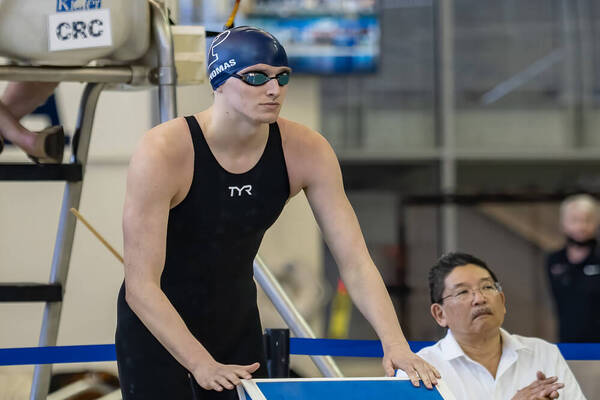 (breitbart) Infamous transgender swimmer Lia Thomas finally lost a race after the NCAA chose someone else for its Woman of the Year award this year.

The hulking Thomas, a biological male, was nominated for the award by the University of Pennsylvania early this month and was one of 577 nominees for the honor.

Despite dominating the NCAA swimming championships, the college sports organization went in a different direction for its Woman of the Year award, passing the honor onto Columbia University fencer Sylvie Binder instead.

“An NCAA Women’s Foil Champion in 2019, she placed fifth at The Ivy League championships this season, second at the Northeast Regional, and third at the NCAA Championships with an overall record of 17-6. She was also named the 2022 Women’s Connie S. Maniatty Award winner as Columbia’s top senior student-athlete,” Fox News reported.

The NCAA’s Woman of the Year award recognizes “female student-athletes who have exhausted their eligibility and distinguished themselves in their community, in athletics, and in academics throughout their college careers.”

Thomas, who had an undistinguished swimming career for three seasons when competing for UPenn as a male, made headlines this year after a first-place finish in the women’s 500-yard freestyle event in the NCAA’s swimming championship.

Thomas’ performance shocked college sports and brought the ire of teammates, 16 of whom joined in an anonymous letter to complain about the “unfair advantage over competition in the women’s category” that Thomas represented.

“Biologically, Lia holds an unfair advantage over competition in the women’s category, as evidenced by her rankings that have bounced from #462 as a male to #1 as a female,” the letter said.

Another teammate later added, “You can tell he is mentally ill. I saw the video and was so disgusted. Lia identified as a woman, but she is not a female. That is a fact. It doesn’t matter how you feel.”

“It’s not about excluding transgender women from winning ever,” Navratilova said. “But it is about not allowing them to win when they were not anywhere near winning as men.”

“But right now, the rules are what they are,” the tennis great added. “Maybe put an asterisk there if she starts breaking records left and right.”