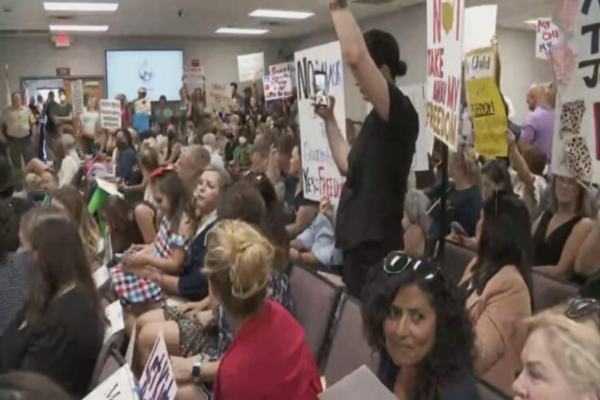 (bigleaguepolitics) – Patriotic school board protests across the nation are engendering fear in the heart of the globalist establishment. Parents have had enough of government officials trying to mandate facemasks, vaccines, anti-white Critical Race Theory teachings and other tyrannical measures on America’s schoolchildren.

Parents who recently stormed a school board meeting in Vail, Arizona and elected an alternative school board inspired parents nationally by getting a win: the school district dropped its planned mask mandate for the school year. Now, the movement is on to force out-of-control school boards to actually listen to the voices of parents and the movement is racking up wins, including Florida Governor Ron DeSantis’ ban on school mask mandates in the Sunshine State. Parents protested against the statewide mask mandate in Louisiana on Thursday. Democrats are panicking.

After a protest against mask mandates at the Williamson County School Board in Tennessee, Joe Biden slammed protesters Thursday, stating, “I saw a video and reports from Tennessee of protesters threatening doctors and nurses who were before a school board making the case that to keep kids safe, there should be mandatory masks. And as they walked out, these doctors were threatened; these nurses were threatened. You know, our health care workers are heroes. They were the heroes when there was no vaccine. Many of them gave their lives trying to save others.”

Biden chooses not to promote the plight of the many health care workers, including doctors and nurses, that have been protesting against vaccine mandates outside of hospitals across America in recent days. Biden also chooses to take a very partisan view of what happened in Tennessee. One streamer disputed the idea that anti-mask protesters caused some kind of melee, reporting on the protest in this video questioning the media’s narrative on the event:

Anti-white Critical Race Theory curriculum and transgender pronoun regulations are also a hot-button issues at school boards. This week, an immigrant parent in Loudon County, Virginia who is reportedly an Iranian-Christian slammed the leftist pronoun policy, stating: “Dear disgraced board members, you think you’re woke, but let me wake you up a little bit more,” the unidentified father was seen saying in a video tweeted by Parents Against Critical Theory (PACT). “We [his family] are the minority of the minorities in this country [the U.S.]. Our ancestors and people survived massacres of the Turks and ISIS….You want to push that garbage down my kids’ throats, I will make you call my kids ‘king’ and ‘queen,’ that’s how to address my sons and my daughter, and you look at me call me ‘master.’ Do you want that pronoun to be in your mouth when you look at me?”