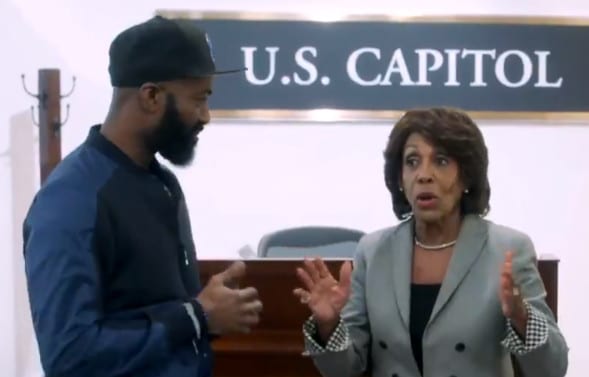 She added, “This is a flawed character, and I’ve never seen anything like this.”

In discussing the 2020 election, Waters said, “I think now it boils down to all of us wanting someone that we feel comfortable can really beat Trump. This country cannot tolerate another four years of him.”

YouTubers Vladimir Kuznetsov and Alexey Stolyarov, who go by the names Vovan and Lexus, recently called Waters’s office and, with the help of a female colleague, pretended to be teenage climate activist Greta Thunberg, TIME‘s “Person of the Year” for 2019, and her father, claiming to have a taped confession from Trump admitting to the exact charges in House Democrats’ articles of impeachment which passed in late December.

A woman who identifies herself as Congresswoman Waters tells “Greta”: “Of course, I know all about you. You have made quite a big, big, big thunder on this issue. I am really, really very proud of you and the work that you’re doing.”

The prank callers trick Waters into making a statement in defense of the environment of an imaginary island named “Chunga Changa.”

The call gets more farcical when “Greta” tells Waters that she met Trump at the United Nations, where he privately insulted her and confessed to threatening Ukraine’s president.

“He came over, he leaned towards me, and said softly, ‘Listen to me very carefully, little girl, you will never achieve your goals,’” “Greta” says.

“Greta’s father” then claims to Waters that Trump told her that he did pressure Ukraine to investigate his political rivals: “He said to her, ‘You know, little girl, nobody believe you anyway, I will tell you the truth. I really pushed on Ukrainian president and you know that you will never achieve your goals like those congressional fools that accuse me.”

“Oh my God, he mentioned the Ukrainian president?” Waters exclaims.

Waters then presses them on what else Trump said. They told her that they got the conversation recorded and have evidence. Waters then asked if they would be in Washington, DC, anytime soon and if they could meet with her.

“Greta’s” father then offers for the young girl to testify if Waters needs it.

Waters responds, “Oh yes, I am absolutely still working — we are working very hard, we’re putting together the facts, and we’re going after him. We are going to try everything that we have to impeach him.”

“And if the public knew that he talked to Greta like that, he made her cry, and told her she would never achieve — this will go against him, too,” she adds.

“You bring it to me,” Waters says of the recording they claimed to have. “You tell me what day you can get there. And we’ll arrange to meet with you as quickly as we can.”

This is the second time the pranksters have purportedly tricked Waters. In February 2017, Vovan and Lexus posted a video where Vovan posed as the Prime Minister of Ukraine and discussed Russian sanctions with a woman who they identify as Waters.

Waters’ office has not replied to a request for comment.